Where are the savings from

A person who has admitted to committing fraud in the amount of 80 million NOK claims that the savings of the BCC local churches have disappeared. Accounts and documentation prove this to be a lie.

What is the truth?

Fundraising in the local churches

During the past 10 years BCC’s local churches have built up capital for the future using fundraising drives. This fall, NRK Brennpunkt sent questions to at least 15 of these churches, asking for documentation on where their savings are.

According to their source, Jonathan van der Linden, who is charged with fraud, the money has ended up in church leaders’ pockets.

The local churches have clear oversight of their bookkeeping

In both BCC and the local churches, the accounting records are familiar to the local boards, management teams and annual meetings. Funds from BCC Financial were paid back with interest, and members have voted on where the savings are currently placed. In addition, the accounts have been audited by reputable companies. In other words, there is clear oversight of the money raised over several years.

“In other words, there is clear oversight of the money raised over several years.”

Facts of the case

Read more about the financing model for the development at Oslofjord here: Brunstadstiftelsen’s webpage.

The allegation that money intended for the construction project instead “landed in leaders’ pockets” has been carefully fabricated. Since 2016 it has been spread on many platforms, in both Norway and the Netherlands, as part of the influence operation’s distorted reality.

In 2016, while Jonathan van der Linden sat in a Dutch prison, he handwrote a 40-page indictment. In it, he presented an alternative reality about many different people and organizations.

One of the concrete points van der Linden raised in his written indictment was that BCC’s members were deceived, and their money was gone.

The 40-page indictment describes an alternative reality about BCC and its members.

From van der Linden’s notes (our translation from the original Dutch):

In recent years, money has been raised worldwide through BCC Financial Ltd. In peak years, the company managed more than €100 million. Members were deceived and made to believe this was used to finance the enormous construction project at Brunstad.

All allegations in the operation lead back to the same evidence: thousands of e-mails and documents from van der Linden’s seized laptop, which are between 5 and 10 years old. These e-mails are mentioned in the purchase order of the influence operation, and again in Psy-Group’s 2017 report, designed by Emmanuel Rosen in Amsterdam.

Since the influence operation against BCC started, these e-mails have also been used for extortion. In addition, material from the same source has proved to have been tampered with in connection with legal proceedings in the Netherlands. The e-mails have been for sale on the black market for €850,000. The e-mails were also received by the newspapers Dagens Næringsliv in Norway and NRC Handelsblad in the Netherlands. After this, the e-mails were a part of Økokrim’s investigation.

In this investigation, van der Linden’s 40-page indictment was a key piece of evidence in the first phase of the investigation. Økokrim spent a lot of time and resources investigating the allegations in this document and related e-mails, collecting huge amounts of bank statements, accounting records, and questioned witnesses.

Several years later, NRK Brennpunkt takes an interest in making a program about BCC. They quickly get in touch with Jonathan van der Linden as a central source. Psy-Group describes him as a main player in the influence operation and Ben van Wijhe as the client.

Dialogue from NRK Brennpunkt’s research phase shows the journalist received help from a group called Ben van Wijhe’s “network”, or his “team”, to retrieve evidence from the same e-mail account. Oscar Floor is described as part of this team.

This material then forms the basis for the allegations made by NRK Brennpunkt against BCC one and half years after the operation was exposed in American media.

In September 2020, BCC receives the first specific questions from NRK Brennpunkt. The questions contain precisely the statements Jonathan van der Linden has repeated and tried to establish as truth for several years.

NRK writes to BCC and to Kåre J. Smith:

«…we have documentation showing that all the churches in Norway (except for the one in Oslo/Follo), in the year after, in June 2015, made agreements with BCC Financial to write off their savings in BCC Financial.»

«In connection with the ongoing case against Jonathan van der Linden, his lawyer says that members of BCC expected the money donated would go to the expansion project at Brunstad, but instead large amounts of the money disappeared ‘in the pockets’ of church leaders. He bases this on the fact that leaders received loans for millions of euros from BCC Financial which were never repaid. Jonathan van der Linden, for his part, says that no money from BCCF went to the development of Brunstad as long as he was director of BCCF.»

These are very serious allegations that have been proven to be incorrect with documentation, and stem precisely from van der Linden’s and Psy-Group’s alternative reality.

Documentation provided, but not good enough for NRK

BCC wants an organized and open process to explain to NRK that it is not using credible documentation about the case, and to give caution against using these sources. BCC therefore immediately contacts NRK’s ethics editor and requests a meeting. 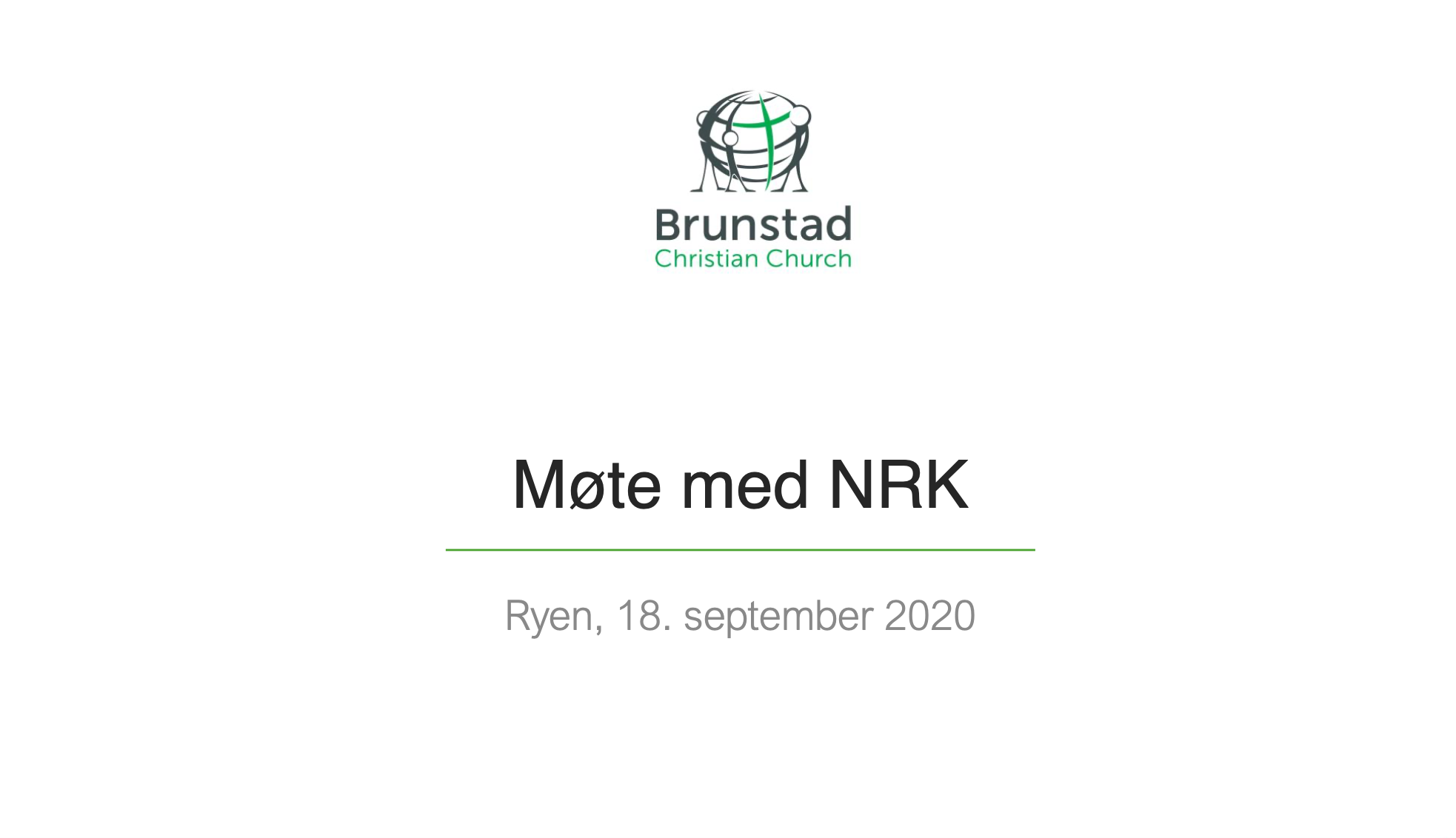 In the meeting on September 18th, 2020 we show this presentation (PDF in Norwegian)

Despite documentation BCC presents in the meeting, that audited accounts prove BCC Financial repaid all the churches’ loans with interest and the business was liquidated with a profit, NRK Brennpunkt chooses not to trust the documentation from BCC’s chairwoman. Ten days later, NRK Brennpunkt sends e-mails to BCC’s Norwegian churches, requiring them to prove that what BCC chairwoman Berit Hustad Nilsen presented is actually true.

The local church boards have solid documentation of this, and continuously answer the questions asked by NRK Brennpunkt. Many volunteers spend dozens of hours retrieving old documents, so NRK Brennpunkt will see that the churches know where the money is. The various churches also have made their annual account records publicly available on their websites.

Van der Linden and his e-mails are thus given greater credibility than accounting records, documentations and the boards in both BCC and its local church branches. And this despite the fact that van der Linden has acknowledged fraud in the approximate amount of 80 million NOK from the mission foundation he worked for, and he is being named as the central player in the design of the alternative reality intended to end BCC’s existence.

NRK will not withdraw the allegations before publication

Even though BCC has repeatedly asked, NRK Brennpunkt refuses to withdraw the gross allegations it has conveyed about BCC’s local churches and leaders. The program has not yet been broadcasted, and it is unclear whether NRK Brennpunkt will include the claims in the program itself.

NRK refers to the fact that it is the journalistic result that counts, but for BCC and its members it is extremely serious to allow such claims to remain unresolved. BCC considers NRK as dishonest when it says it is not able to give a clear answer as to whether the allegations are withdrawn, or if it still believes them to be true.

Visible proof: Here is the money

Most of the local churches chose to lend all or part of their savings to the ongoing construction project at Oslofjord Convention Center. The total cost is estimated to be approximately 3.6 billion NOK and the project is now in its final phase. It is itself  a visible evidence of the fact that the enthusiasm from local churches and BCC members have yielded results. Evidently, the money  is there in the form of steel and concrete.

This amazing facility is evidence of that the enthusiasm from BCC’s local churches and members have yielded results.